14.2 acres of woods was purchased in 1994 by Bergen County from the parent company of The Record for $1.75 million. A year later another acre on the hillside was added for $90,000. 15.33 acres is officially preserved, and there’s another acre of unbuildable wetlands in Maywood along Coles Brook, and a few more hillside lots privately held. The rectangular ecosystem is about 18 acres, plus there is a 3.75 acre panhandle to the southeast of the preserved area, for a total of 21.65 acres of open space. All photos in this series were taken on January 27, 2006. 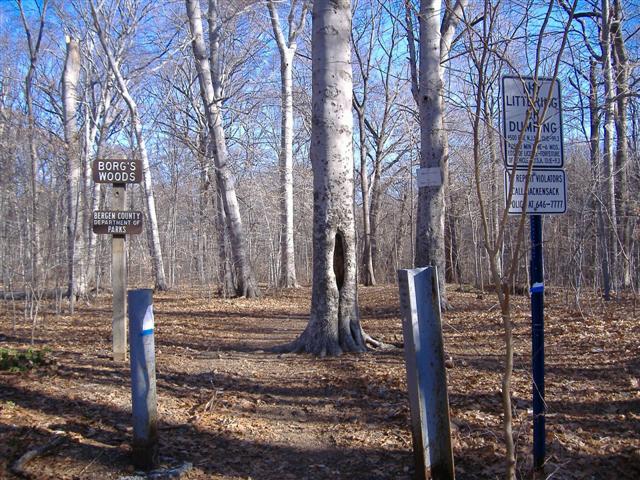 Above: Byrne Street entrance at the south end of Borg’s Woods. 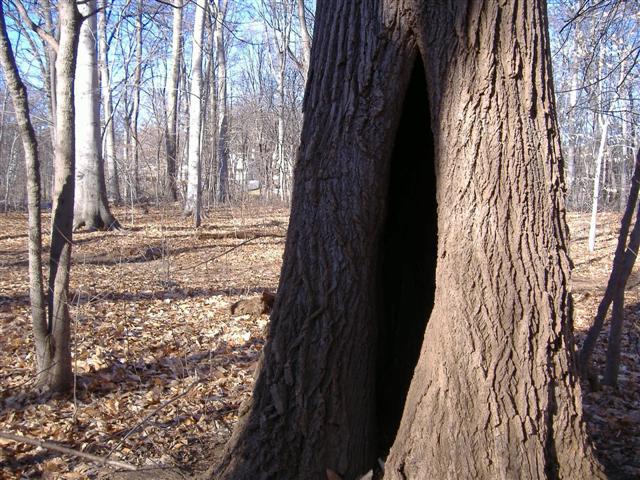 Above: Hollow Tuliptree about 150 feet from the Byrne Street entrance; over 12 feet in circumference (it began leaning in 2005, and may soon fall) 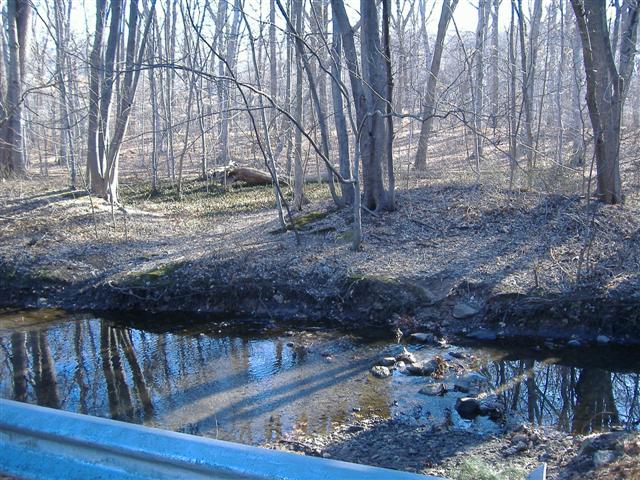 Above: Woodland Avenue entrance on the west end of Borg’s Woods. There has been a trail here for over 50 years. There is also access at Washington Ave, where an even older trail has been restored. Most of the Washington trail was restored exactly into the old trail bed, but the portion near Coles Brook had to divert around a dense thicket. 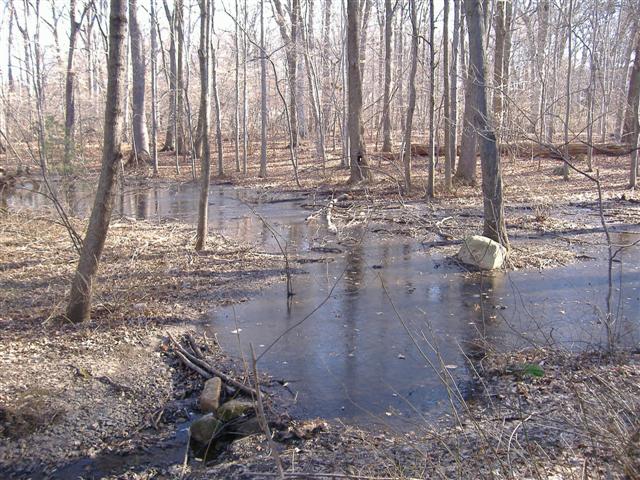 Above: "Jerlinski Pond" (a 200 foot-long vernal pond near Coles Brook and Lafayette Ave). In the 1970’s, there was a dense patch of phragmites reed here, but they slowly dwindled away and completely died out. They were replaced by native trees and ground plants. 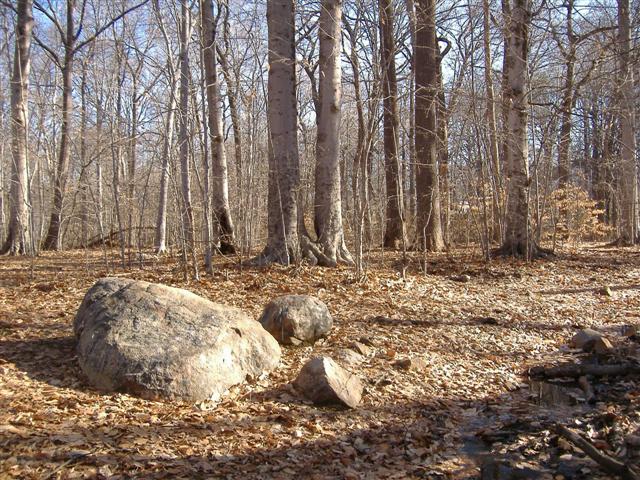 4. "The Rock" is actually the 2nd largest glacially deposited boulder in Borg’s Woods; the other is not in as prominent a location. Also shown are the twin Beeches along the trail. 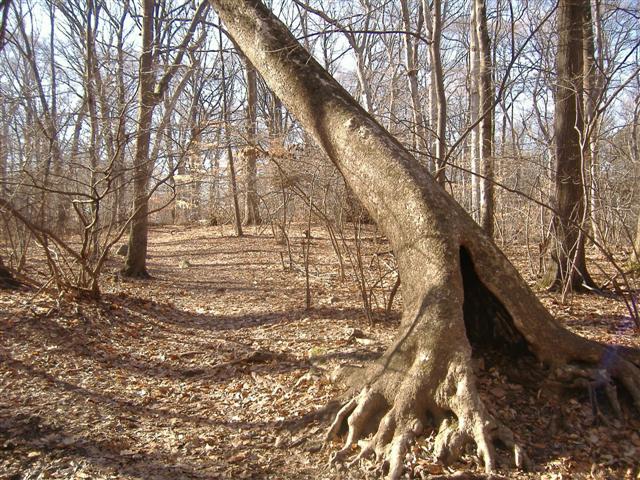 Above: The "Leaning Sycamore" is now 8’0" in circumference and growing rapidly. Damage at the base shows that it was originally a "V" specimen. The northern half fell and completely rotted away, but it left a tell-tale scar. The southern half partially fell, landing on an Oak over 50 years ago. Now it’s freestanding once again, and the roots have been thickening to support the weight. The ancient trail cut is believed to be of Native American origin. The two ends of the Main Trail align with modern suburban streets. Both end segments are now located east of the original trail, but the middle two-thirds is considered to be an authentic Native American pathway. The footpath and the surrounding old-growth woodlands are completely unchanged from the way they were 500 years ago. This is Bergen County’s living museum. 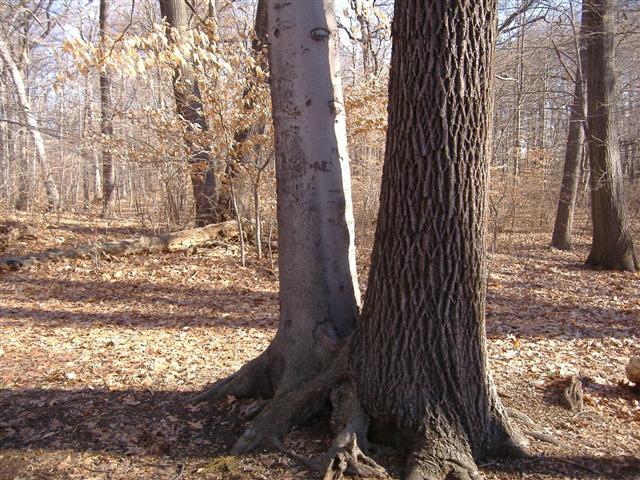 Above: The "Racial Harmony Trees" near the intersection of the Main Trail and the Woodland Loop Nature Trail (Beech and Mockernut Hickory) 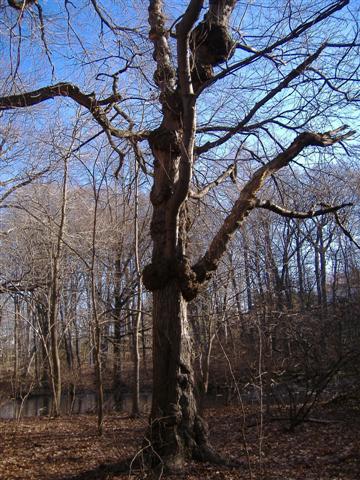 Above: "The Witch’s Tree" along the Woodland Loop Nature Trail west of Borg Swamp (it’s a Red Maple almost 8 feet in circumference). Red Maples sometimes have these grotesque burls. This area of the woods has dense beds of skunk cabbage. 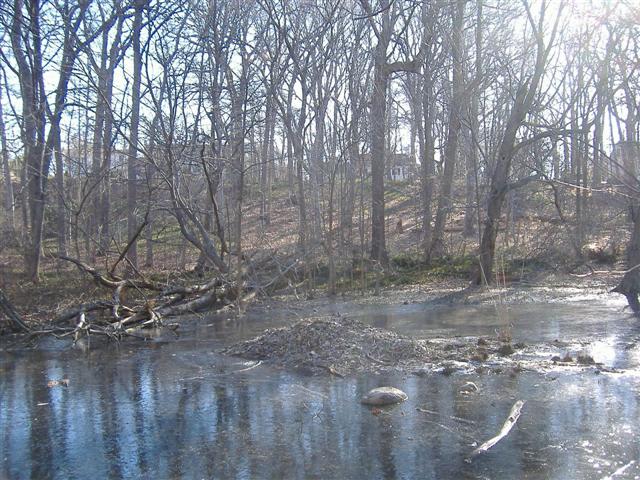 Above: "Muskrat Lodge Island" (formerly the location of a hockey goal). There are more muskrats than ever in Borg Swamp. In January, 2006 there were three lodges. 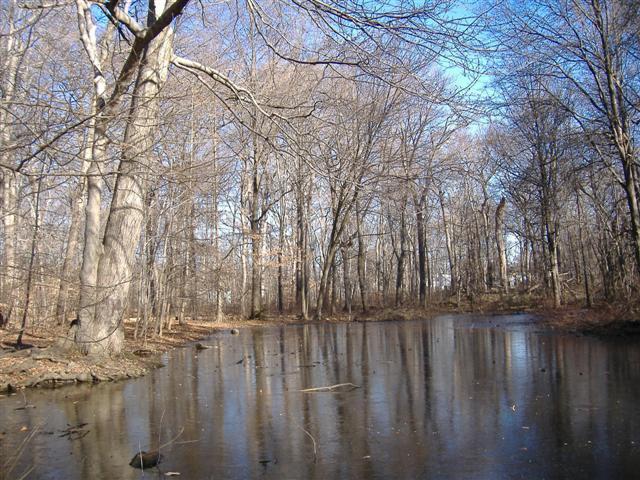 Above: The "Main Pond" within the larger Borg Swamp (it’s all a big vernal pond 700 feet long). It is speculated that threatened and endangered species of amphibians native to New Jersey could be stocked here. They will have adequate water to reproduce and would experience less predation because Borg’s Woods is isolated from other natural areas. If so, this site could become a breeding ground to attempt to reintroduce the species throughout New Jersey. 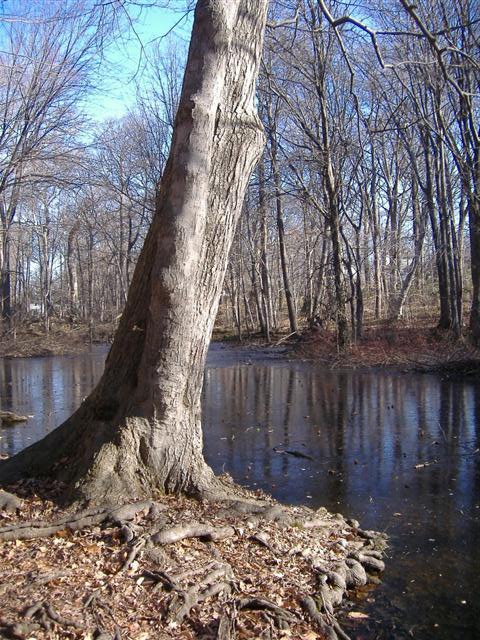 Above: The "Pond Maple" (it’s a Red Maple almost 9 feet in circumference). Muskrats live under the dense roots, and in the hollow core of the tree. 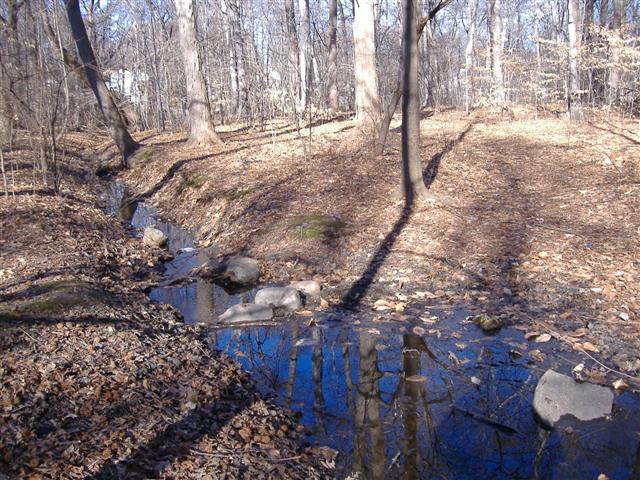 Above: Unnamed runoff creek of Borg Swamp, it usually runs between October and May, and very infrequently in the warmer months. 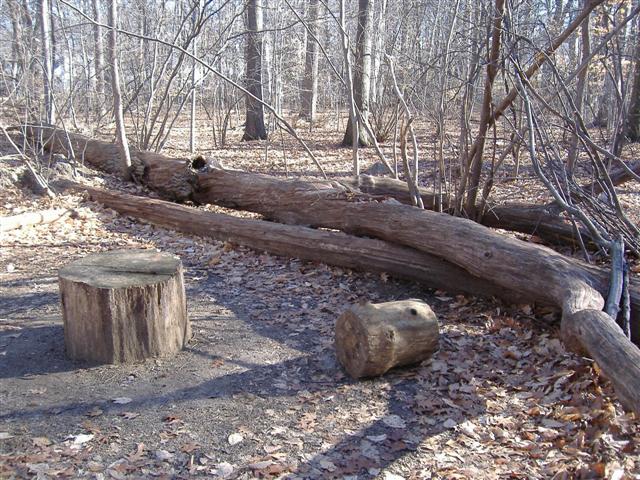 Above: The "Round Table in the Boardroom"; a meeting spot. Two Northern Red Oaks fell in the Northeaster of March 4, 1993. After they fell, they were measured. The thicker one was 99 feet tall, and the small one measured 101 feet. A Tuliptree only about 6’ in circumference that fell in Hurricane David (September 1979) measured 125’ at the time. The tallest living trees in Borg’s Woods are estimated to be a Mockernut Hickory (over 130 feet) and a Tuliptree (over 140 feet). 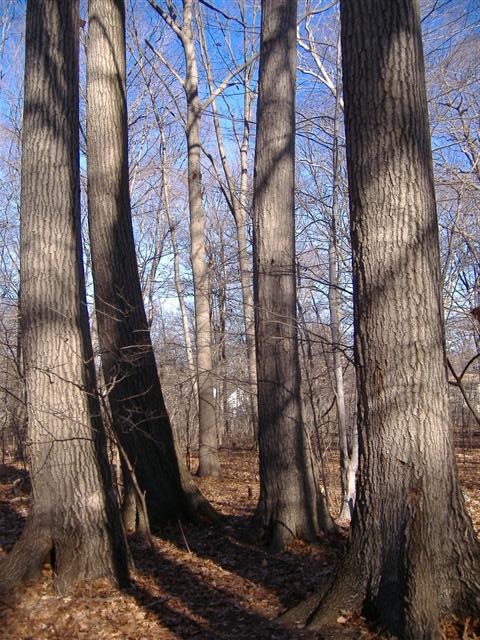 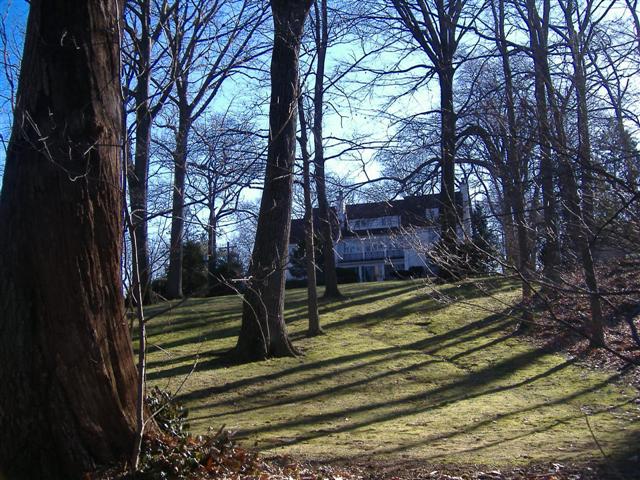 Above: The former Borg Mansion and the old sledding hill. Most kids rode "Flexible Flyer" sleds made of wood with metal rails. They were much faster and more dangerous than the wimpy plastic things that kids ride now. Plus kids made jumps at the bottom of sled runs, and the sleds got seriously airborne. 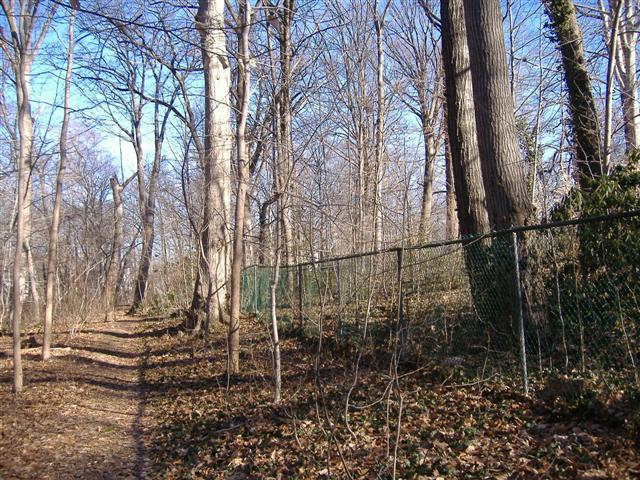 Above: The fenced hillside lot along the trail. Originally part of the Borg estate, it was sold in the distant past to the adjacent estate on Summit Ave. 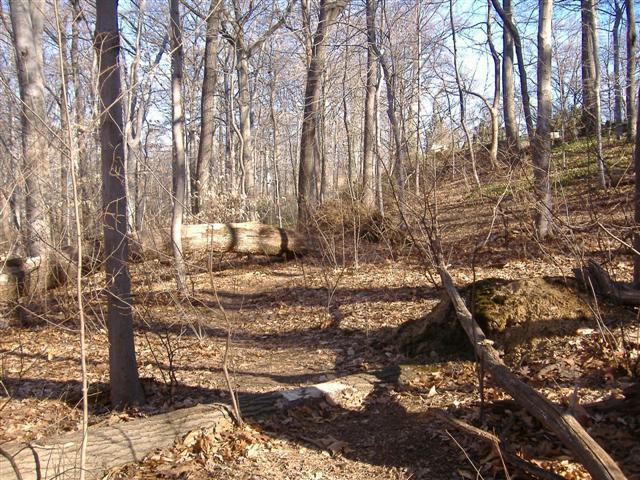 Above: Fallen trees on hillside along Woodland Loop Nature Trail (they fell in Hurricane Floyd, September 1999, causing the trail to divert onto the hillside lots which had been added to the preserve by the lobbying action of the Sierra Club North Jersey Group in 1995) 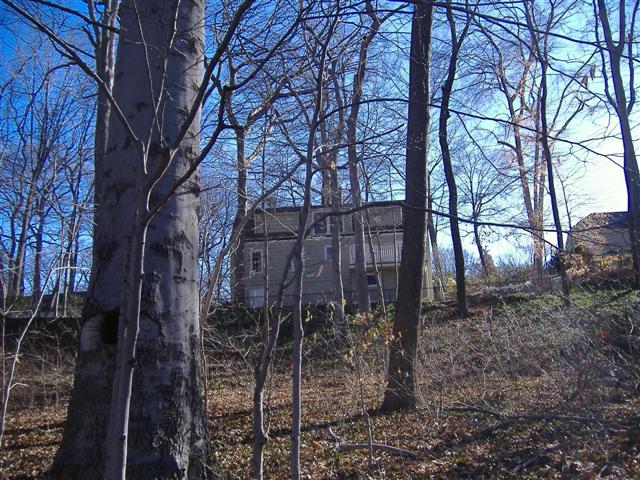 Above: The "Carriage House" was subdivided off the main estate at 609 Summit Avenue in order to became the Borg’s Woods Nature Center building, but Robert Brower’s plans to sell it to Bergen County in 1994 never went through. (The Beech in foreground measured 10’1" in circumference in 2005) 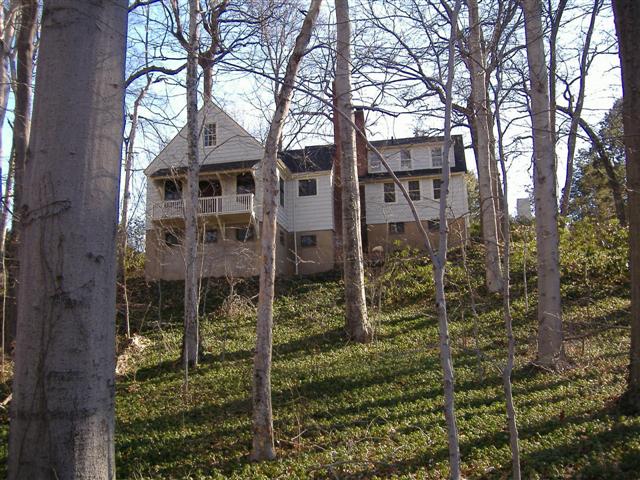 Above: The "Mummy House" at the southeast corner of Borg’s Woods is no longer vacant. Do not trespass here. 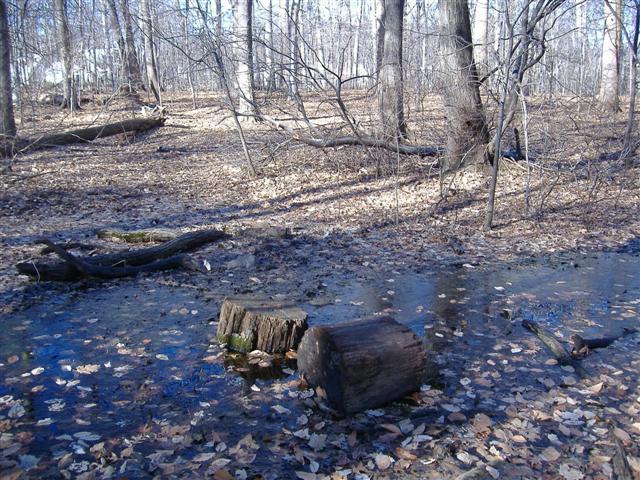 Above: Southern wetland crossing of the Woodland Loop Nature Trail. Still looking for an Eagle Scout to take on this project. We need a wood-plank nature trail here, something very low key.